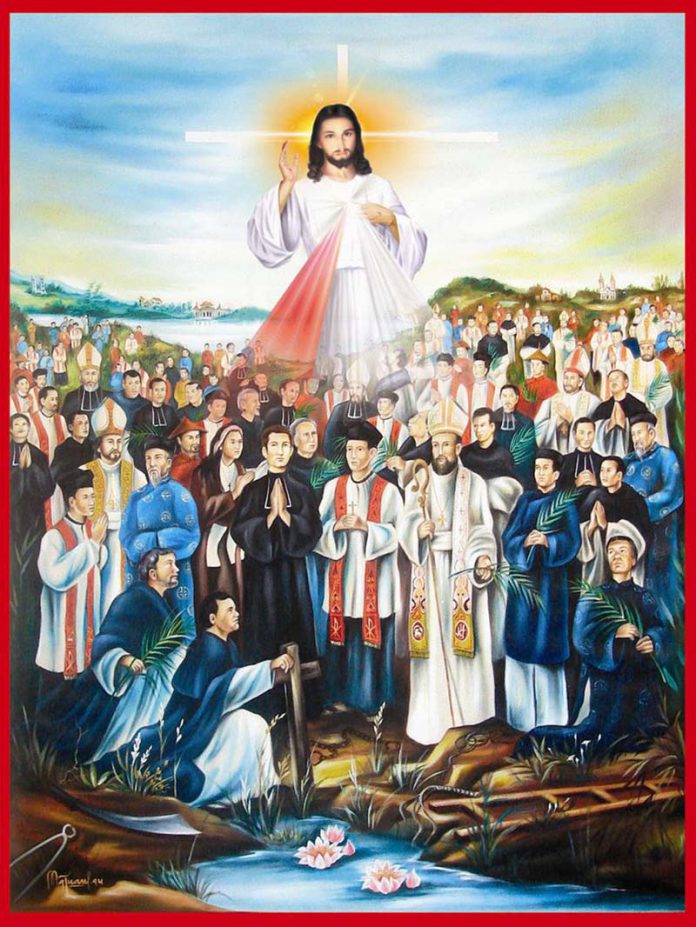 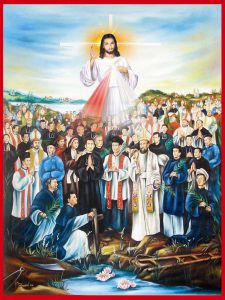 Many of martyrs also called the Martyrs of Annam who were slain for the faith in Vietnam from 1798 until 1861. Between 1798 and 1853, sixty-four were martyred, receiving beatification in 1900. Those who died in a second group, between 1859 and 1861, were beatified in 1909. There were twenty-eight courageous men and women who died for the faith during a long period of persecution. A Portuguese missionary arrived in Vietnam (used to be called Annam, Indo-China, Cochin-China, and Tonkin) in 1533. An imperial edict in Vietnam forbade Christianity, and it was not until 1615 that the Jesuits were able to establish a permanent mission there, in the central region of the country. In 1627, a Jesuit went north to establish another mission. By the time this missionary, Father Alexander de Rhodes, was expelled from this region in 1630, he had baptized 6,700 Vietnamese. In that same year the first Christian martyr was beheaded, and more were executed in 1644 and 1645 . Father Rhodes returned to Vietnam but was banished again in 1645. Then he went to Paris, France, where the Paris Seminary for Foreign Missions was founded. Priests arrived in Vietnam, and the faith grew. Between 1798 and 1853, a period of intense political rivalry and civil wars, sixty-four known Christians were executed. These were beatified in 1900. In 1833, many Catholics were ordered to renounce their faith, and to trample crucifixes underfoot. That edict started a persecution of great intensity that was to last for half a century. Twenty-eight martyrs from this era were beatified in 1909. The bishops, priests, and Europeans were disemboweled, beaten, and slain in many other grisly ways. For a brief period in 1841 the persecution abated when France threatened to intervene with warships. However, in 1848, prices were placed on the heads of the missionaries by a new king. Two priests, Father Augustine Schoffier and Father Bonnard, were beheaded as a re­sult. In 1855, the persecution raged, and the following year whole massacres began. Thousands of Vietnamese Christians were martyred, as well as four bish­ops and twenty-eight Dominicans. It is estimated that between 1857 and 1862, 115 native priests, 100 Vietnamese nuns, and more than 5,000 of the faithful were martyred. Convents, churches, and schools were razed, and as many as 40,000 Catholics were dispossessed of their lands and exiled from their own regions to starve in wilderness areas. The martyrdoms ended with the Peace of 1862, brought about by the surrendering of Saigon and other regions to France and the payment of indemnities to France and Spain. It is now reported that the “Great Massacre,” the name given to the persecution of the Church in Vietnam, resulted in the following estimated deaths.

Source: Aggregate from some sites