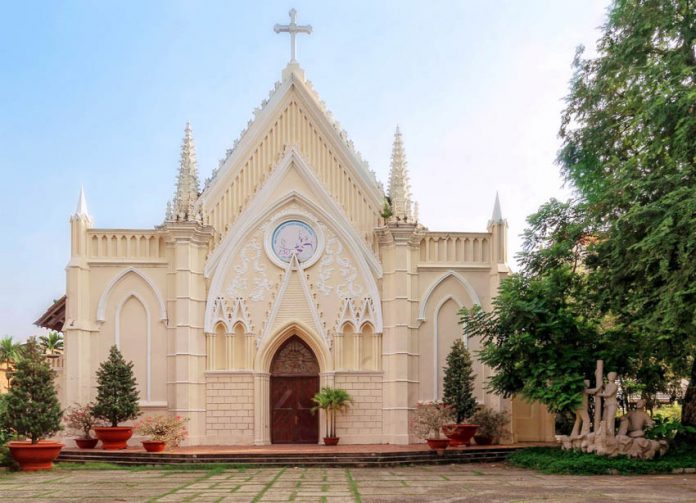 The Saint Joseph Seminary of is a great seminary in Saigon. The seminary has many beautiful and ancient buildings. This place has trained thousands of priests for the south of Vietnam for over 150 yeas. In particular, there is a very beautiful chapel inside the seminary. 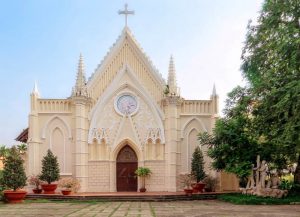 Father Théodore Louis Wibaux was born in Roubaix, Priest Wibaux on March 20, 1820. According to family tradition, he studied law school. In 1846 he was ordained a priest.

On November 24, 1857, Wibaux joined the Missionaries of Paris. On February 8, 1858, the ship started to Vietnam, until the beginning of January 1860 father arrived in Saigon.

When Father Wibaux arrived in Saigon, the next day Bishop Lefèbvre took his father to see the place to find permanent residence for the Saigon Seminary. While awaiting the formation of the Grand Seminary, the bishop assigned Wibaux to take charge of the temporary seminary in Thi Nghe.

2. Starting construction, and inauguration of Seminary

In 1863, Bishop Lefèbvre was moved to tears when he laid the first stone for the Saigon Major Seminary, the central headquarters of the philosophy and theology of Saigon diocese that day and up to now.

Bishop Lefèbvre passed away; the Holy See calls Bishop Miche taking over Cambodia to take over Saigon diocese. At that time, Father Wibaux continued to work on the completion of the major seminary, hoping to compensate for the over twenty years before the beloved Bishop Lefèbvre and his seminarians had to study on water bumps, in the light of oil flicker.

In 1866, Bishop Miche solemnly inaugurated and officially opened. According to the testament of his predecessor who placed the first stone, he named it: St. Joseph Seminary. On the blessed day, seminarians were 60 (including junior students and monk). The diocese then had 30,000 lay people, gathered in 126 large and small parishes by 17 indigenous priests and 25 priestly missionaries.

3. Build the Chapel of the St. Joseph Seminary

“Three rows of houses for the seminarians, but little and simple chapel can not be. The worship place, itself must be solemnly respected, moreover this is the seminary’s chapel, need to reveal, must symbolize the special worship of the seminarians, of course the chapel must be beautiful majesty” , Father Wibaux thought.

Thought and did, despite little finance, there is a lack of skilled workers, but with the experience, in 1867, less than a year after the inauguration of the seminary, Father Wibaux began to build the chapel structure for the seminary.

Bishop Miche blessed the chapel. Up to 28 missionary and native priests came to attend. At that time, gathering such priests was a very special case.

After a period of illness that lasted more than three weeks, on October 7, 1877, the Father returned to the Lord, attaining the age of 57. Probably because of too much trouble with a poor life and constantly building works for future generations of clerics, father is not long life.

Today, his tomb is located behind the seminary chapel, which seems lonely. However, He gave the noble sacrifices to the peasants, leaving his children with a majestic, material wealth.

The chapel of the St Joseph’s Seminary in Saigon is 30 meters long and 10 meters wide, 10 meters high, and has a typical Gothic style. There are many sculptures, religious paintings, and folk paintings. At present, the church (chapel) is mainly the place Catholic foreigners living in Ho Chi Minh City attend the mass.

The exhibit has three floors of antique storerooms, ancient books, relics of the martyrs (such as the bones of the saints, swords, fetters …), statues, religious, and folk art.

Nowadays, the St. Joseph Seminary in Saigon trains priests for the seven Dioceses belonging to Saigon religious province. It is a beautiful worship place which you should not ignore.