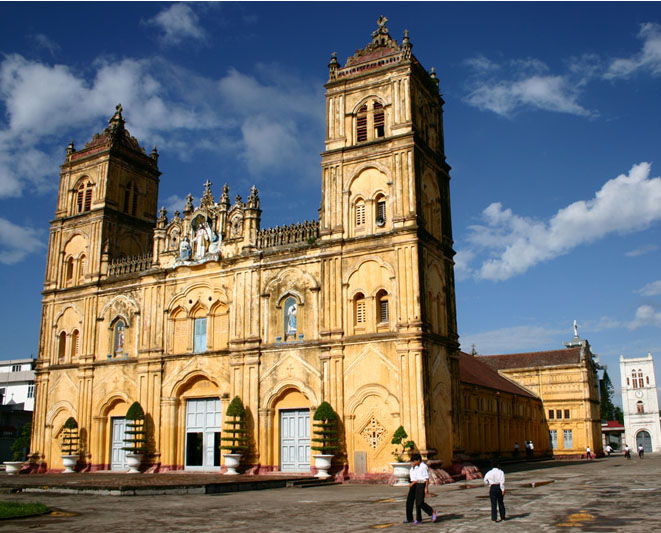 Bui Chu Cathedral built under the French colonialism, is one of the most famous and oldest church in Nam Dinh province. Every year, many visitors visit the church and admire the typical architectural features, as well as learn the history of the Bui Chu parish.

Bui Chu church is the cathedral of Bui Chu diocese, located in the small Bui Chu village in the Red River Delta. It is located in Xuan Ngoc commune, Xuan Truong district, Nam Dinh province. This is also the resting place of the five bishops who once controlled the diocese. Distance from Hanoi Cathedral to Bui Chu Cathedral is about 122 km, 2 hours 33 minutes by car.

Bui Chu received the gospel light with the birth of the Vietnamese Church, and officially became a parish in 1670. Bui Chu Cathedral was built under French colonial by Bishop Wenceslao Onate Thuan (1884) with a length of 78m, width 22m, height 15m. For over 100 years, this church still stands with wooden columns and patterned lines with Western architectural motifs. Every year on August 8, the feast of the diocesan patron, Saint Dominic, many parishioners gathered for the Mass.

Although it is the smallest diocese in Vietnam (about 1,350 km²), Bui Chu diocese has a high number and density of faithful. In 2014, the diocese has a population of 381,906 people, accounting for 20.3% of the total population in the area of diocese.