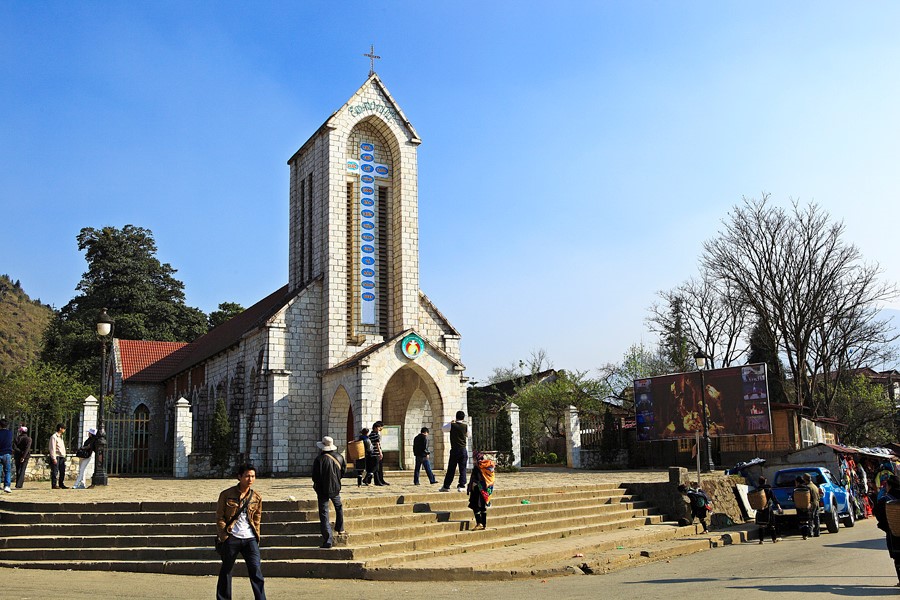 Sapa parish in Hung Hoa diocese, located in Sapa town, Sapa district, Lao Cai province, in the north-west of Vietnam, about 400 km from Hanoi, about 360 km away from the bishopric of Hung Hoa. This is one of the most distant parishes in Hung Hoa diocese, most of the parishioners are ethnic H’mong.

Sapa Parish was founded in 1902 by Missionaries of the Paris Mission (MEP), under bishop Paul Loc, the (Paul Ramond.)

Since its founding, Sapa had always had priests in the parish to serve the parishioners. In 1926, the parish built a church and parish’s house. In 1948, Father Ydiart Alhor Jean was the last priest of parish of M.E.P. was murdered.

In 1995, the local authorities allowed the repair of the church, the parish to resume its activities. Since May 2006, Sapa officially has a parish priest and has been living in the parish, after nearly 60 years without a parish priest.

Sa Pa church is located in a beautiful position, behide there is Ham Rong Mountain, in front of a large land, flat. Impressed by the French architecture, Sapa ancient church is the first highlight of the town.

The church was built in early 20th century. Before placing the first brickwork for this project, the French architects have chosen very carefully to build the site. Until now Sa Pa stone church is preserved intact. 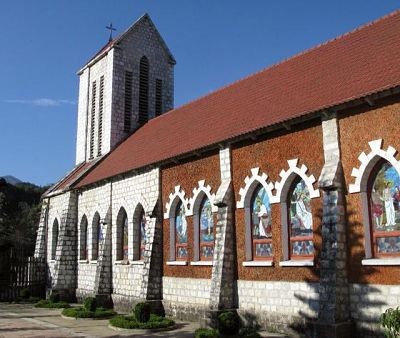 Located in the heart of Sapa, standing on four sides can see this work, along with two other architectural buildings built by the French: Chu Cau villa (now the hotel Hoang Lien) and the old district committee (now the headquarters of Lao Cai Tourism Information Center) to form a symmetrical triangular structure with typical French style.

The architecture of the church was built in Roman Gothic style with roofs, arches and bell towers, … all have pyramid shape to make the work elegant, soaring. The entire church was built of hewn stone and linked together by a mixture of lime, sand, molasses. The wall of the right side of the crucifix is ​​made of sandstone that resembles stalactites as a relic bearing a very natural beauty. Ceiling made of straw lime has been refurbished separately the bell tower made of a mixture of lime, iron and straw remains the original state, has not been repaired at all.

The total area of ​​the church is about 6000m2, divided into several areas: church, house for parish priest, breeding area, angel house, courtyard, garden and fence. The larger church with 500m2 area includes 7 chambers and the bell tower is more than 20m high, inside the bell was cast in 1932, weighs 500kg and 1.5m high. At present, on the bell is still clearly marked the number of people donating money to make this bell. The bell-support was made of wood, when restored, are kept intact.

Sapa is a popular tourist destination of Vietnam, it has the characteristics of the climate, natural scenery, culture of ethnic minorities … So here are often  visited by many visitors.

History of the Photo of Our Lady of Perpetual Help in...