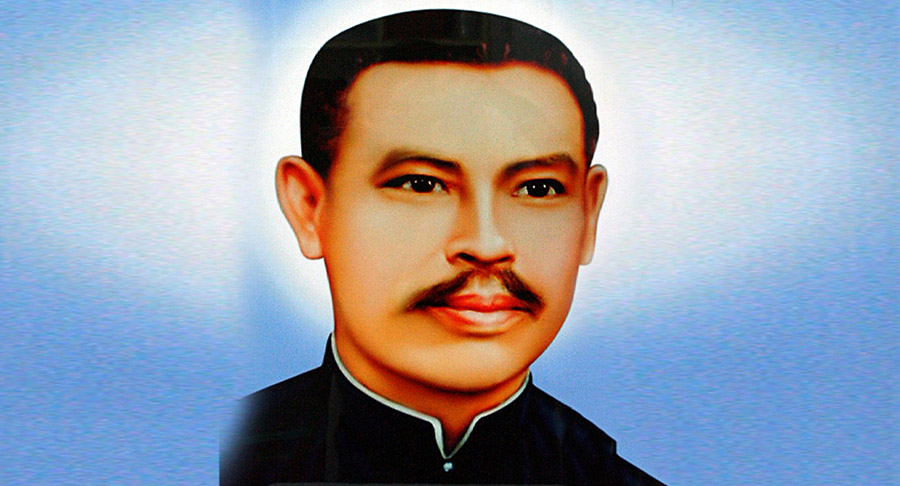 Fr. Truong Buu Diep was born on January 1, 1897, a month later, his father was baptized on February 2, 1897 at Con Phuoc, now in My Loi hamlet, My Luong commune, Cho Moi district, An Giang province.

In 1924, he was ordained a priest in Nabang under French Bishop Chabalier. From 1924 to 1927, he was nominated as the assistant vicar of the Ho Tru parish, a Vietnamese parish living in Kandal province, Cambodia.

From 1927 to 1929, he became a professor at the Cu Lao Gieng seminary in An Giang province. In March 1930, he supervised the Tac Say parish, Gia Rai district, Bac Lieu province.

In March 1946, the French colonists returned and were present throughout southern Vietnam. By April 30, 1946, the French colonialists increased their forces and went to Ca Mau town. The administrative facilities have since started operation. Other parts of the province remain administered by the Viet Minh. That year, father Diep looked after Tac Say Parish.

On March 6, all four foreign nuns and two Vietnamese nuns were captured by the Viet Minh. In the morning of March 9, a group of Viet Minh arrived at Tac Say church to find father Diep. They questioned the six officers of the parish, and detained them and then not asking anymore. Two hours later they gathered all of their relatives, total over 40. All were detained at Diep’s father’s house. Viet Minh send message to Father Diep that if he returned, they would release people.

Around 6 pm on March 9, people came to Hoa Thanh to inform Diep. At 9:00 PM on March 9, my dad, often called Master Hai Ngo Thien Can, came to pick up five fathers to Bao Sen to hide. All of them agreed except for Father Diep, who would stay, to return to the Tac Say parish the next morning to save his parishioners who were captured

On the morning of March 10th, on the way from Hoa Thanh to Tac Say, to Ca Mau fork, if he had gone straight only 20 minutes to Ca Mau town, where French troops are stationed. If faher wanted, he could inform French that 6 nuns and many parishioners detained and ask them to go rescue. It was too easy, but he did not accept the help of the French colonialists, chose the solution of sacrifice, and saved his people by himself. Probably because he did not want the Church to suffer a bad reputation was that the Church relied on the French, he turned right and went down the road to Tac Say.

By 6:00 pm on March 10, Father Diep came to Tac Say, and presented himself. They asked the Father about the whereabouts of the other four, but Father did not declare it. They not only did not keep the promise to released a parishioner, but imprisoned father Diep in the room of the parish. In the middle of the night they called Father to question again, Father still resolutely not declaring.

In the early morning of March 11th, from the holy graveyard of the church, there were more than 60 people, most of them non-Catholics, whether they were at home or on the street, they were escorted to the church. . Up to this time, there were over a hundred people, including old, young, boys and girls detained. Afterwards, they took all the detained people to Cay Dua about 4 km. The journey of the delegation arrived at five o’clock.

At 8:00 am on March 12th, they took Father Diep to Mr. Dao’s house to ask again. Father still does not declare. Frustrated by the father’s resolute spirit, they take him to the store of rice.

Two hours later, they resolved to come up to ask more again. This time they beat and tortured Father very much. Father is still the same as before, resolutely not declaring. Before they resolved, they called to ask Father again, and threatened that if Father was still stubbornly not declaring the Four Fathers to be hiding, they would burn the straw and burn all the captives inside.

Not want to relate to the lives of the four fathers, the Father advised people to consider their repentance and the Father carried out the last confession for the group .

At 2:00 pm (March 12, 1946) they asked father the last time. This time they beheaded father, one to lose a skull on his head, and one to make his head almost break from his neck. After killing him,they stripped his clothes and throw his body into the pond.